Deprecated: assert(): Calling assert() with a string argument is deprecated in /home/customer/www/streams.expert/public_html/mediawiki/includes/parser/Preprocessor_DOM.php on line 542

Deprecated: The each() function is deprecated. This message will be suppressed on further calls in /home/customer/www/streams.expert/public_html/mediawiki/includes/MagicWordArray.php on line 197
 STREAMS Ontology - STREAMS Wiki

Following Popper, Habermas and a few other philosophers, STREAMS takes an ontological pluralist and realist perspective and takes it as a principle that there are three independent "realities":

These "realities" are independent in the sense of not depending on any individual or small group (of humans) for their existence - what Bhaskar's Critical Realism calls "Intransitive Objects". For ease of reference we call these three worlds the Physical, the Mental, and the Abstractal - but some case must be exercised when identifying them with traditional philosophical concepts. STREAMS Philosophy is therefore a form of Realism - including being realistic about mental (psychological) states, perceptions, ideas and concepts.

This emergence is not simple (simplistic) philosophical "properties supervenience", but more probabilistic and multifaceted phenomenon where irreducible properties emerge from a lower level structure and dynamics of assemblies (multicomponent systems). How these emergences take place is currently a philosophical problem that is moot for STREAMS purposes, but may become a scientific problem once an appropriate conceptual scheme that aids explanation can be found. [Past philosophical conceptual schemes - such as Cartesian Dualism -tend to obfuscate rather than elucidate the emergence of the mental from the physical.]

STREAMS follows Critical Realism in carefully distinguishing between both "mechanisms", "events" and "experiences" and the domains of the Real, the Actual and the Empirical. Hence STREAMS rejects naive Empiricism and the implicit anthropocentrism and anthropomorphisms within it. Rejecting empiricism entails the rejection of Logical Empiricism, and Logical Positivism. STREAMS follows Critical Realism in asserting that the role of Science is to describe the (possibly unobservable) "generative mechanisms" and shares a concern for a scientific approach, empirical verification (or falsification), and objectivity (and opposition to meaningless mystical metaphysics).

STREAMS also rejects the Humean notion of causality as the constant conjunction of events (and the empiricist grounds on which it is formed). STREAMS follows Critical Realism in having a rich and complex view of "causation" and asserting that if two notional events, A and B, are constantly conjoined it is because they are both produced by the operation of same (real) generative mechanism (that is described by a scientific "law" and model) in which causal influence flows from the predecessor spacetime event to the successor spacetime event (given that predecessor and successor are relative, not absolute terms and the relationship (or flow) could go either way around) unless the conjunction is prevented by other causal influences.

It may be that at some point in the future scientific explanations of the phenomena of minds and of scoial structures and forces will be produced and render either World 2 or World 3 reducible to and explainable in terms of physical phenomena. However, at present such a reductive explanation is not possible and STREAMS pragmatically acknowledges their irreducibility. This does not mean all presently posited or hypothesized theoretical entities, properties or behaviours are regarded as accurate and likely to be preserved in future theories. It may be, for example, that the "neural correlates of consciousness" are just as illusory and misguided as was "de-phlogisticated air" and will cease to be taken seriously as a part of any future scientific theory. 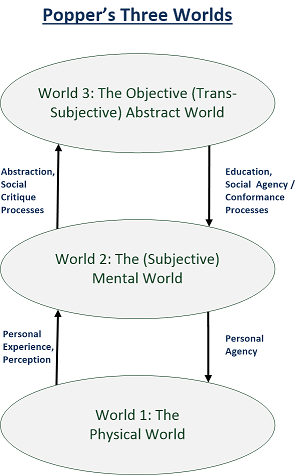 In the Tanner Lectures Karl Popper outlined an ontology conception aimed at challenging both traditional monisms and dualisms; and to rescue the notion of "Objective Knowledge" from Subjectivism or Relativism. The diagram at the right illustrates this conception.

"... the world that consists of physical bodies: of stones and of stars; of plants and of animals; but also of radiation, and of other forms of physical energy."

While there are some Idealists and anti-Realists in modern philosophy, generally speaking this concept is uncontroversial.

Again, while there are some philosophers who are not realists about "mental states" or their contents - and think they are perfectly correlated (identical) with physical states in the brain - this is also relatively uncontroversial as most people feel they have direct veridical access to their own thoughts. [Though this may be a mistake of intuition.] World 2 is the world of individual consciousness, personal experience, perception and subjectivity.

World 3 is: "... the world of the products of the human mind, such as languages; tales and stories and religious myths; scientific conjectures or theories, and mathematical constructions; songs and symphonies; paintings and sculptures. But also aeroplanes and airports and other feats of engineering."

Rejection of Idealism, Relativism and Subjectivism

STREAMS is realist about Popper's three worlds - including the existence of mental states and concepts. The means STREAMS rejects strongly reductive realism - the thesis that all phenomena can be reduced to and explained in terms of physical phenomena and forms of Intrumentalism like Behaviourism. But it also means a rejection of Ontic and Epistemic Idealism - the notion that reality, or our knowledge of it, is constructed from what people think or experience.

In Bhaskar's "A Realist Theory Of Science", he identifies three "Domains of The Real" as a part of the fundamental ontology. These are depicted in the diagram below.

The point of this conception is to exhibit human experience as having direct access to a very limited part of reality. These "domains" of Critical Realism are not an alternative theory to the pragmatic ontological pluralist conception of Worlds 1, 2 and 3. Rather it is an orthogonal and complementary conception; there are Real, Actual and Empirical events and causes in the Physical, Mental and Abstractal worlds - and in all three the empirical - those events and causes "directly observed" are a small slice of the Real.

External Realism holds that there is a representation-independent reality. This means that reality does not depend on what people think or how they describe it. External Realism is Anti-Idealism; it says that our "... experiences are caused by an external reality which is logically independent of those experiences and representations". (Rust, pp. 5)